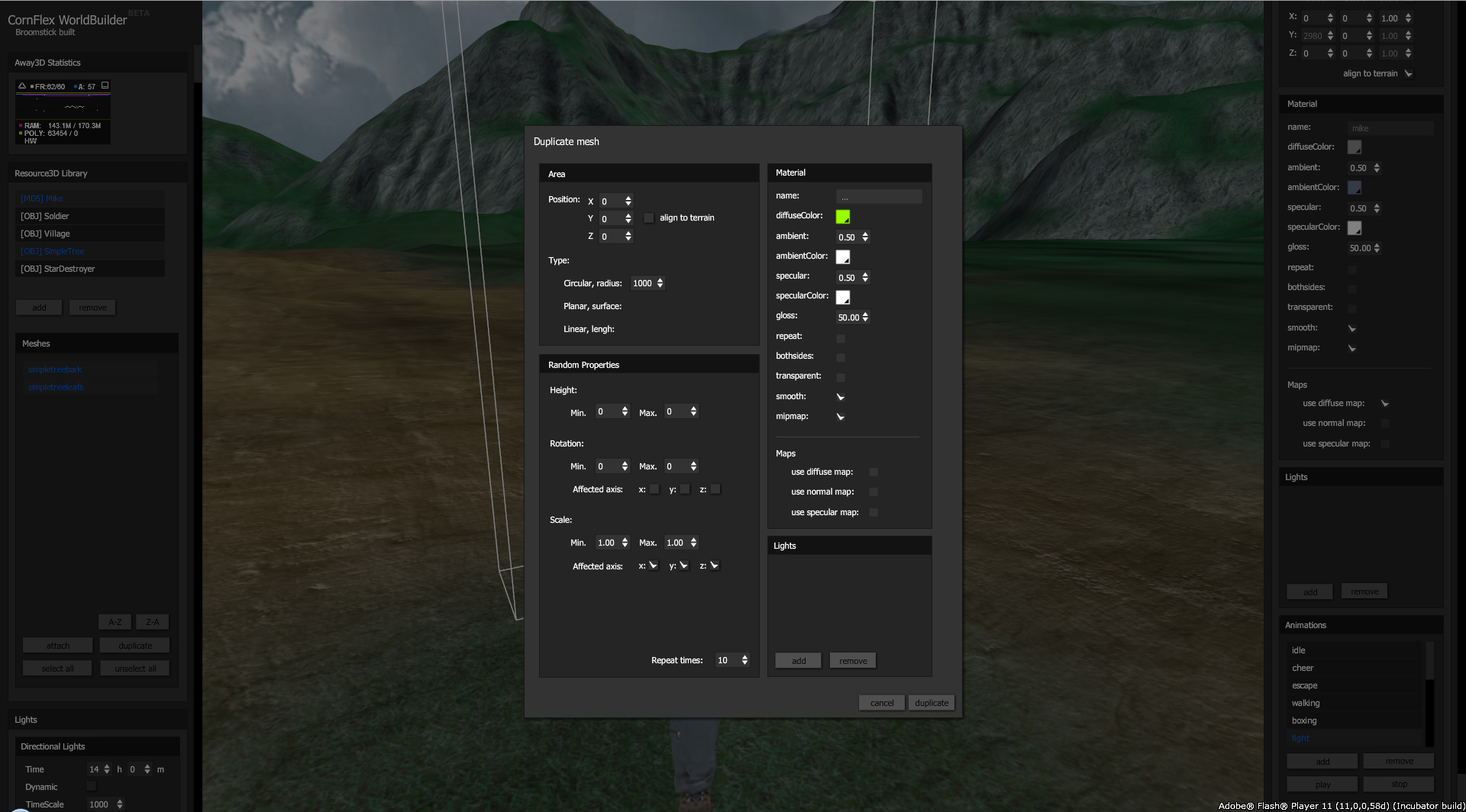 I received a lot of interesting messages from very interested people but as Unity is now exporting Flash Stage3D content, I had to stop development on my own 3D editor :/

WorldBuilder was a 3D software based on Adobe AIR and Away3D framework I built in 2011 during free time. It helped you to build Flash 3D worlds easily and prepare your environment before scripting into it.

In the video below, you will able to check some features and also the export functionality to an AS3 project. That means, once your 3D world is built, you were able to code interactions in AS3 and create some 2D Flash content on top of it. You also were able to test your project directly in a browser as the world is exported for web by default. A mobile export was planned too.

The WorldBuilder AS3 Framework I made gives direct access to all Away3D 4.x features.
You can easily call a mesh and “play” with it, change a light, move the camera and change its mode, play with Skyboxes, use dynamic elliptic lights (Sun and Moon), play mesh animation, use normal and specular maps, adjust light levels, …

So, at this time, the development is on hold… surely forever.

I’ve almost finished the WorldBuilder migration under AIR 3.0.0.388.
For now, when you save your WorldBuilder project, the application export the project under an AS3 Project structure, which you can open with Flash Builder or FlashDevelop.

That means you are able to script your own AS3 code in the world you have created.

Some features in the new framework, based on Away3D 4.x, will help you to access to all the objects, lights, terrain, skybox, library, animations, physic engine. 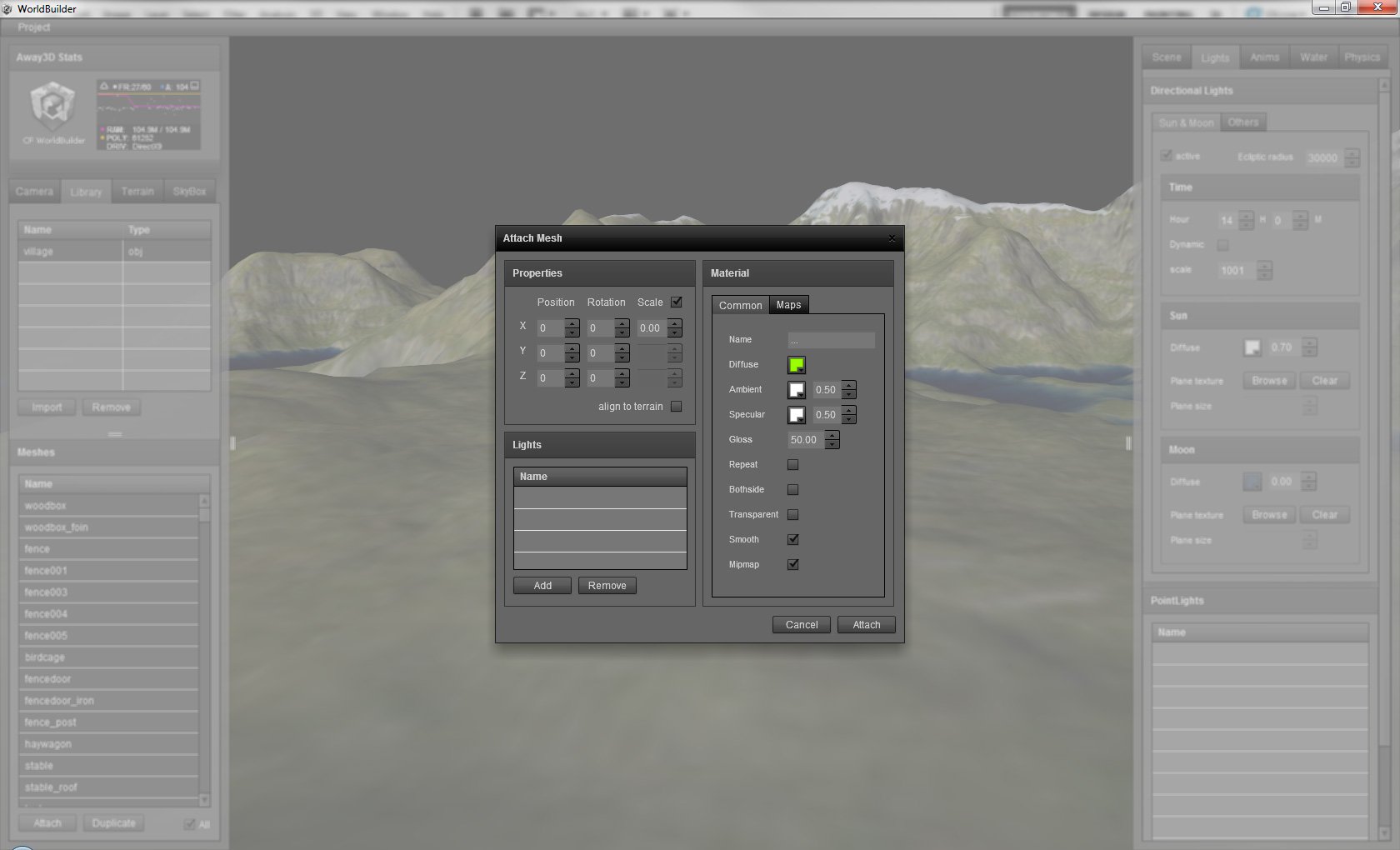 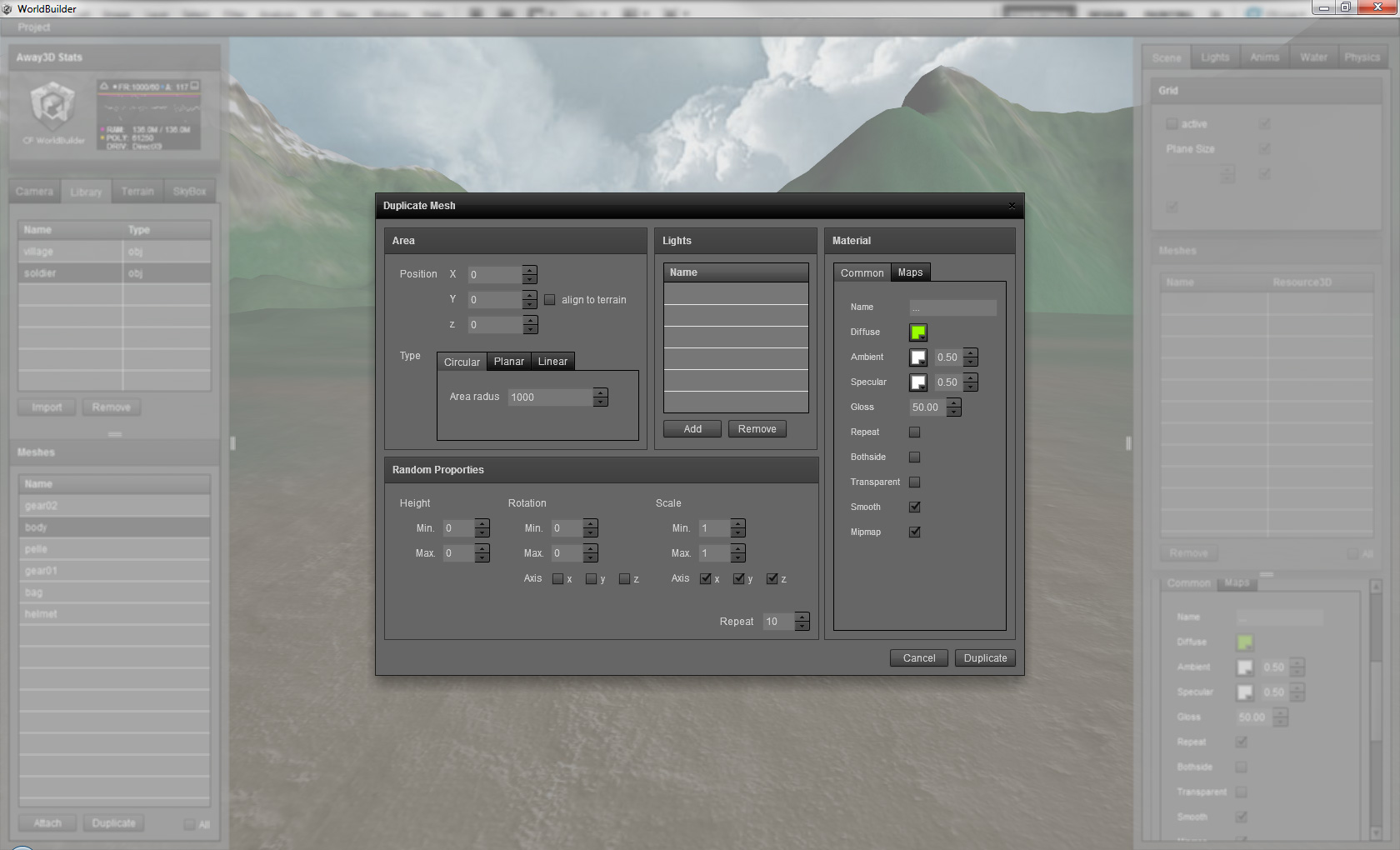 With the latest Away3D Broomstick framework, the possibilities are now huge and impressive in Flash 11 (still in incubator version). WorldBuilder offers a UI approach to handle all the features of Away3D in a simple way to use for the end user.

WorldBuilder helps you to handle easily all the materials, lights, objects, terrain, skybox, animations in your Flash environment.

For example, you will be able to:

Once your world is ready, you will be able to save it and reload it when you want… with the builder features or without.

You will also be able to apply AS3 scripts easily on every mesh, every light… on every thing that is in your scene.
That means you will be able to create your own AS3 game classes or framework by using the items of your world put in place in WorldBuilder.

For the physics, I’m planning to implement BulletFlash. 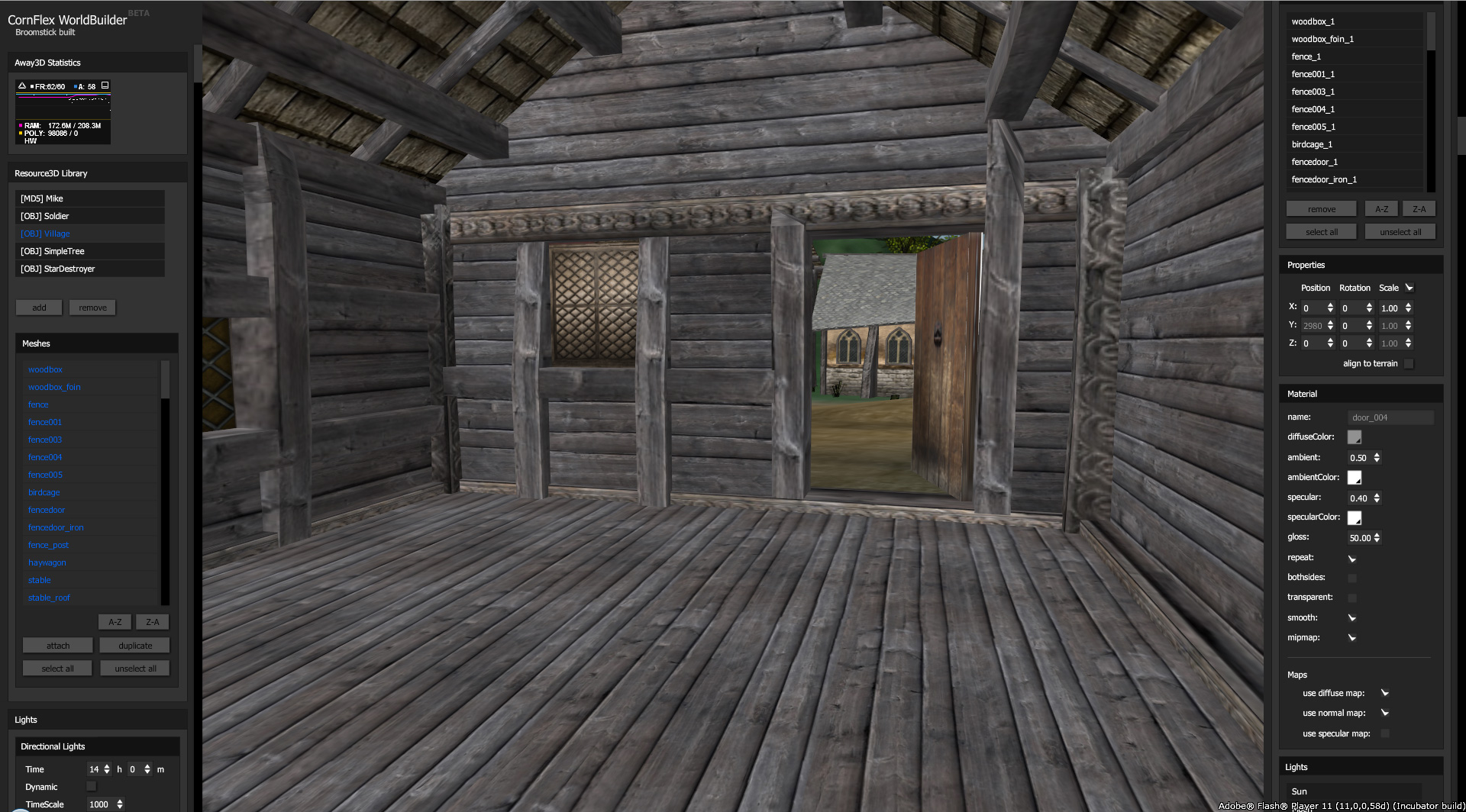 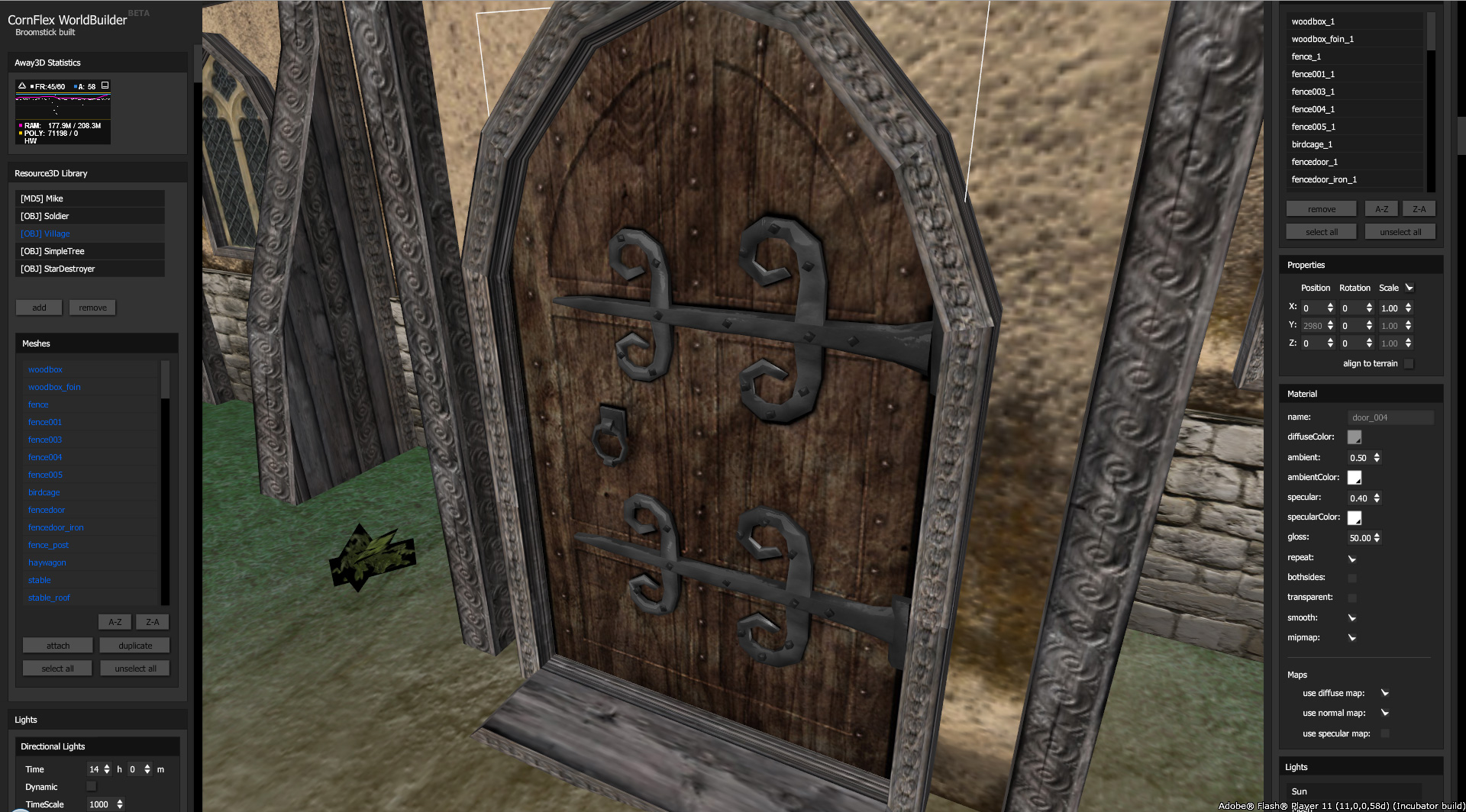 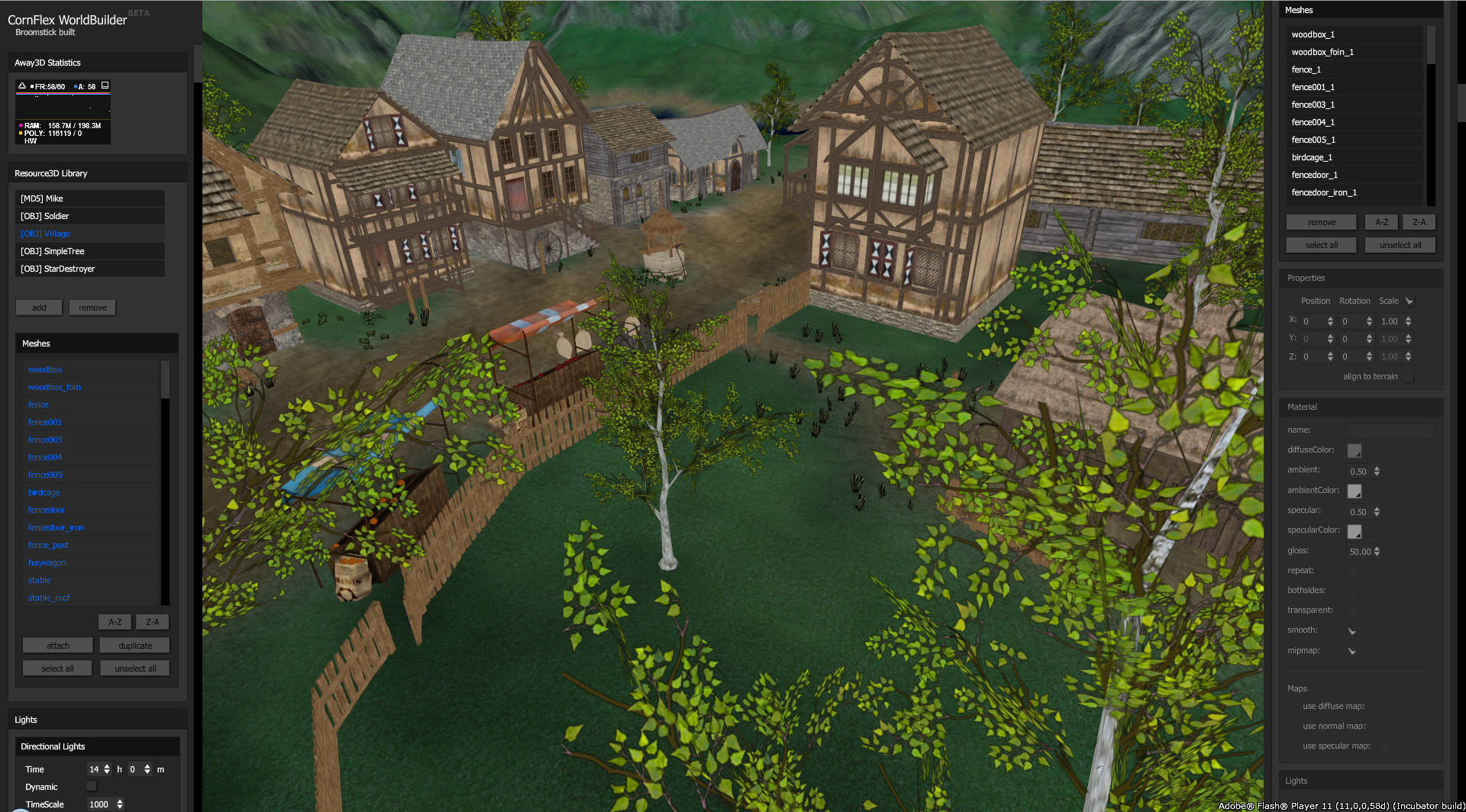